One year ago today Robo Instructus was released on Steam & itch.io. It has received regular updates since then, the latest version 1.28 landing in late May. But how did it do?

The vast majority of sales came from Steam. The Steam dashboard provides a couple of interesting breakdowns.

The majority of sales came from the US, not too surprising. Good sales from Russia & Germany too.

The game was developed on Linux and launched with Linux & Windows support. Mac support came a little later. Unsurprisingly, the majority of players use Windows.

* Steam doesn’t actually count Windows explicitly, so this tally is the sales that are not counted as Linux or Mac.

I don’t think too many conclusions can be drawn from a small game like this, but there is a fairly safe conclusion for indie game developers.

Make a Windows version and put it on Steam.

Sadly the game was largely ignored by the gaming press on release. However, it did feature on the front page of Steam for a full 24 hours. I’m still not sure why really, but this surely had the biggest impact on the getting this game noticed. Thanks Steam. No thanks press.

Right now the game is rated Positive on Steam with 86% of 37 user reviews. The number of these may be interesting relative to the sales numbers. I think this rating is often glanced at, so I’m grateful it’s positive. I’ll definitely be adding positive reviews for games I enjoy with sub-1000 reviews in future, it really helps. 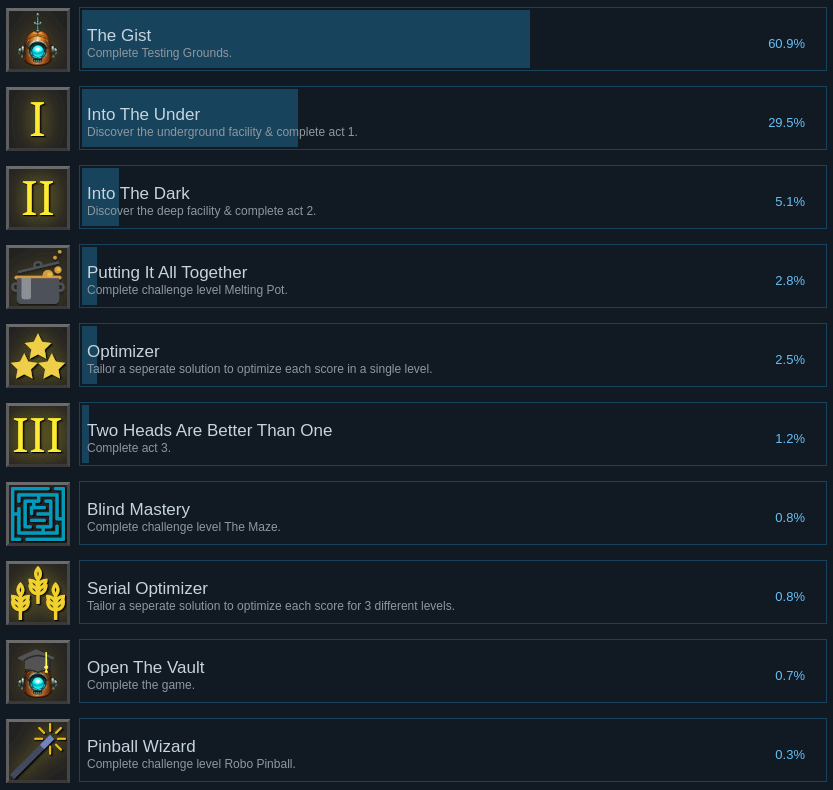 I’m not a huge fan of achievements, but I think a smaller number of them (that actually mean something) can add value overall. Each one of the above requires actual effort. For this kind of linear game they also show roughly how far players progressed.

It’s clear that players struggle to progress deeply into Robo Instructus with only 5% completing act 2 (of 4). That’s a shame as I was hoping more people would see the probe+robot concurrent programming of the 4th act. I’d really like to improve this, perhaps I can make changes to soften the difficulty curve and help more people enjoy the latter parts of the game.

On the other hand, of those 5% the drop off to completing the game isn’t too bad. Really, people have actually completed this hard as nails game I put out, programming in a language I made up. That’s pretty cool, there are some clever gamers out there for sure!

People mostly don’t publish sales figures, I guess it makes more business sense to be vague. But maybe these will be helpful or interesting in some way.

The ultimate personal takeaway was that the sales couldn’t justify me making yet more games full time as I did Robo Instructus. I went back to a regular software engineering job in October 2019.

I’m still convinced there’s legs in programming as a game mechanic. I really think Robo Instructus offers something that nothing else on the market quite does. I’d love to experiment more, I wonder where else games-where-you-code can take us?