Last week I was detailing some of the difficulties of implementing Robo Instructus’ latter concurrency puzzles. Today I’ll take you through what this means from a player point of view. How do you use this probe to actually solve some levels? 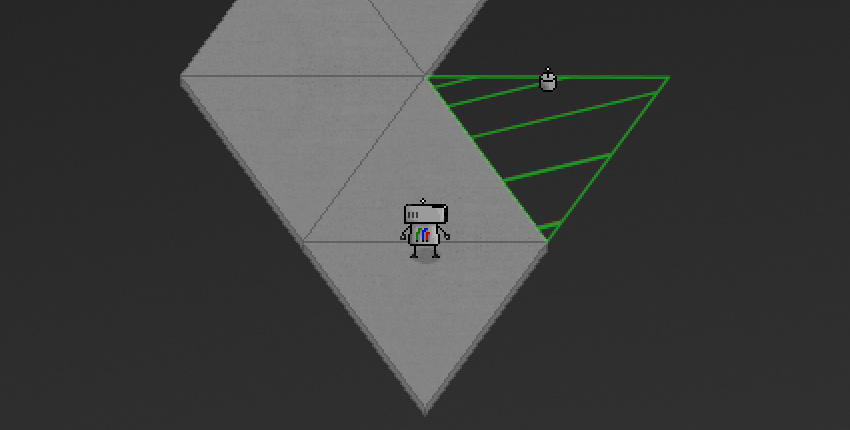 On these final levels you have both the robot and the probe. However, the objective remains the same. That is to get the robot to the level exit. The probe doesn’t need to be at the exit, she’s just here to help!

The probe will take on some of the functionality the robot previously had and adds the ability to travel over gaps. Together they’re more powerful than the robot ever was, but as in any relationship the key to success is communication.

The robot & the probe can talk using two new functions.

With these two bad boys players can setup any communication channels they might need to pass information between the probe and robot. It’s a simple push & listen type messaging system, an important point is the functions do not block. That is, a receive(123) call will not wait for a message to appear it either returns a message or -20000 the “no message” error code.

I’ll show you an example, which will be similar to the first probe & robot level in the game. Take the following 2 variants and imagine we need to get the robot to the top tile of both with a single program.

Pretty simple. But now cosider that the robot has only robo_left(), robo_forward() regular functions. This means the robot simply cannot solve both variants. The robot has no eyes to see where to go.

The probe is here though, she can move about too and has probo_scan(). So if we can get the probe to go and scan where the robot can’t the probe will become the robot’s eyes.

Because it’s simple I’ll take you through it in detail.

Shoving that in code we get:

A nice example of working together! Notice how the programs run without blocking each other, though the robot explicitly waits for a message.

Of course, this could have been solved with a single robo_scan() if it were available. But as players progress they’ll have to solve more fiendish puzzles that could never have been tackled with single robot logic.