This week I’ve been working on lots of under-the-hood improvements to Robo Instructus from the point of view of the later “probo” levels. Despite the alpha-1 part of the game being mostly unchanged I’ve made a new release alpha-1.13 containing all the fundamental engine changes that have taken place in the last few months. Let’s take a look at a small UI change that will be visible in the release.

Robo Instructus already has a summary for the available API to players. It’s a blue bar at the top of the code that tells you what functions your robot can use. Each function takes a line along with a brief description to remind you what it does.

This is really useful to have, although with a load of functions it can start to get a bit big. Previously I just added a button to toggle it, so you could hide it completely and called it a day. However, since I’ve been working on the probe levels things have got worse. The probe adds another code panel beneath the robot one, with it’s own blue bar of available functions. 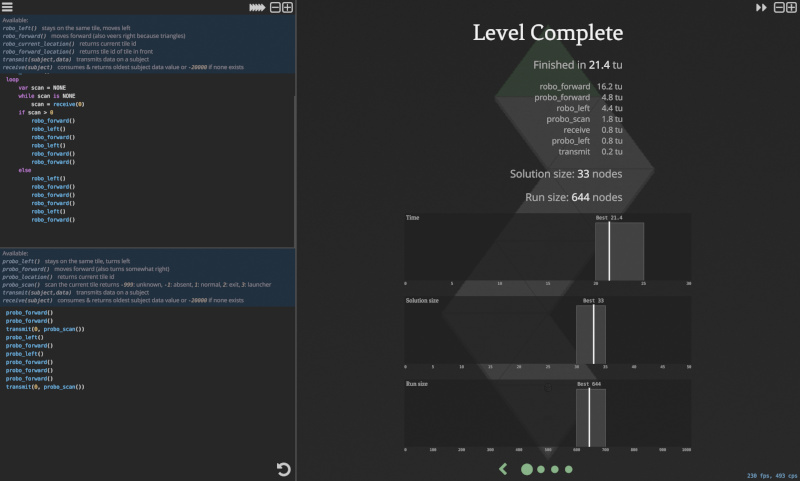 The summary is starting to take up a large proportion of the screen height now there are are two. But I found I didn’t really want to hide them totally, as they are really useful to have around. So instead I thought actually players are unlikely to be interested in the description of robo_left() after a few levels, they’ll know what it does. After a while you’ll just be interested in what you have available and you’ll hopefully be past wondering what the function does.

So I figured compress the available functions that the player has already used a few times before into a single line, and just show novel functions along with a description. Best of both worlds.

This seems to work well enough that I got rid of the button to remove the summary totally, now it should never become too big and get in the way of a players mess of code.

I thought so, but I hit a bug in my text library that cause the line-breaks to not work properly with all the functions in one line. I had to roll up my sleeves (not literal, it’s summer) and re-write gfx-glyph’s layout code. A couple of days later the issue is fixed, and the layout code runs over twice the speed as a nice bonus for my efforts.

It’s been a while since releases and that’s expected as I’ve been working on post-alpha features of the game. But so much of the core game code has shifted that it’s useful to have an up-to-date build available to the testing group. Along with the spattering of new stuff is a whole shift in the engine and a huge number of dependency updates from around the rust gamedev community. Including my own gfx-glyph crate the latest version of which also released today.

So alpha-1.13 should just be a little leaner, faster & better than previous releases, let me know otherwise test people!