New Stuff For The New And The Old

Working towards completing the puzzle content I’m busy designing and implementing new levels and puzzle mechanics. A lot of the new stuff I’m a bit hesitant to talk about, but I’ve also made some improvements to alpha-1. In particular a new level!

As I was designing a new function coming in the full game I created a level and stripped down the availability of other tools. So you can really just move about and use this one new tool. I found it’s a nice way of introducing a tool because it forces you to think about how it works in isolation.

News for the olds

This made me wonder if this technique would help in learning robo_detect_adjacent() from alpha-1. That’s when the game really begins, the first proper puzzle, but I think people are experiencing quite a spike in difficulty at that point.

To help with that I released alpha-1.10 today, bringing a new level that removes location & scanning. You really just have robo_left(), robo_forward() & a first go at robo_detect_adjacent(). If you got stuck on the previous alpha’s give this one a go and tell me what you think!

That’s not all, my quest to improve the tutorials never ends. New for this level, I actually explain while and for looping. 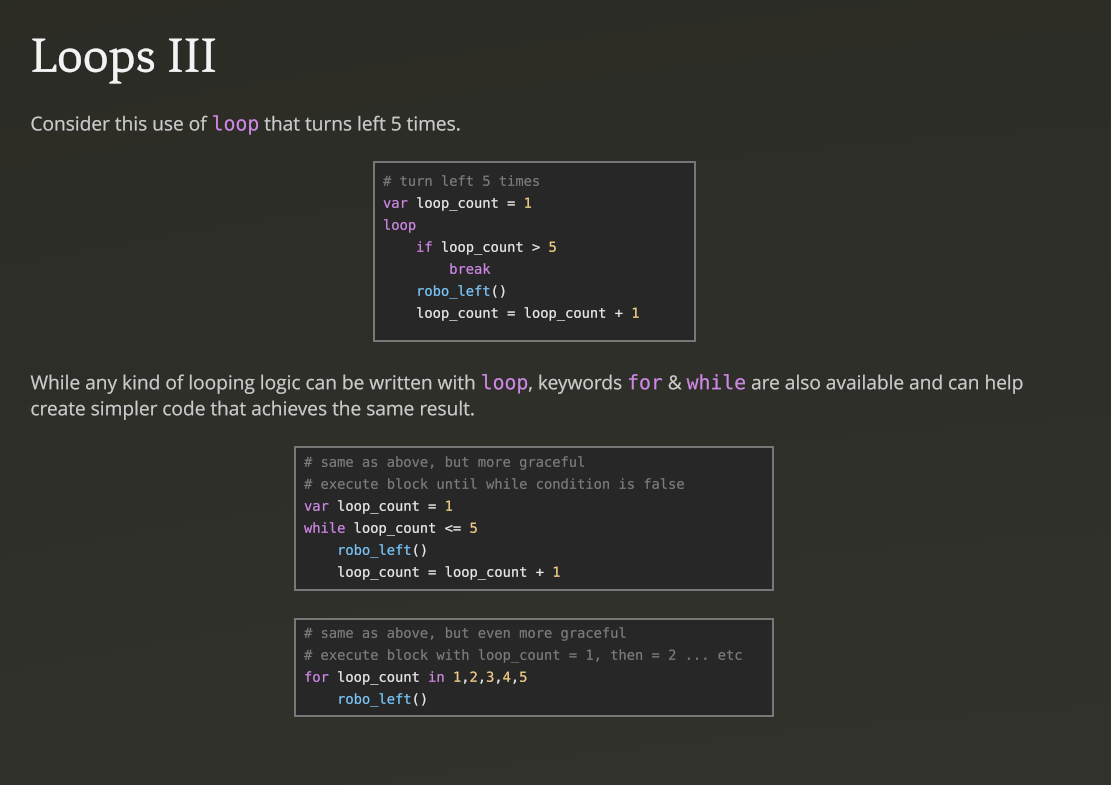 I’ve re-done part of the function tutorial to try and make it less abstractly based on plus-ing numbers and more on calling robo_x() functions that the player has been doing.

Finally alpha-1.10 also brings new feature for the in-line debugger; highlighting ‘constants’ that you’ve named. They show up in brackets alongside the number when they’re unique. Something like: -999 (UNKNOWN) instead of just -999.

News for the news

As mentioned I’m actively working on new stuff. But I’m keeping the build together in one, no weird branch stuff, and I’m planning yet more alpha-1 content. I’ll tell you more later! oooooooowwwwww.