Inside The Alpha Loop

Last Tuesday evening I sent out the first alpha version of Robo Instructus to a small elite group of trustees. In the time since a few of them have sent me a whole lot of useful feedback.

This means Robo Instructus is officially in the alpha stage of development. I’m going to focus on iteratively improving this first slice of the game using the feedback of the lovely alpha testers and frequent releases to polish what I currently have. In this way I can get a better understanding on what people are actually enjoying in the game, and this will allow me to finish the game in the right direction.

Pre-release I had a problem deciding whether this game would be too easy or too hard. I genuinely didn’t know how other people would find it. It turns out it was much more on the too hard side.

Alpha-1 dumps a lot of concepts on you and expects you to go ahead and master them. But mastering them isn’t even enough, the actual puzzles of the game aren’t about just being able to code well. It’s about solving a problem using the fluent language of code. As it stands it’s like briefly explaining to someone English, then asking them to solve a riddle.

Ultimately the game is about that riddle, but we don’t need to rush into it. The next version is going to spend a little more time teaching you the language and rewarding you for doing so. I’ve been working on adding new early levels to better introduce the concepts you need to master. 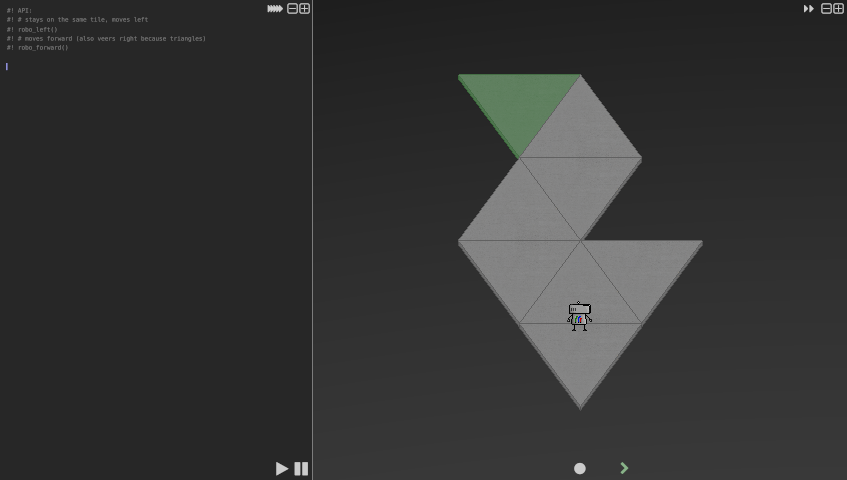 Having no idea why something isn’t working is not fun. I’m keen to remove non-fun frustrations and leave behind only the genuine puzzles that should provide fun frustration. Sometimes this is quite hard for me to see, so I’m hugely grateful for feedback around the annoyances.

For example in alpha-1.1 the first level will be a single variant, then the next level will explain what variants actually are. This should be a better approach than just expecting you to get the idea.

One piece of good news is not many bugs were found. In general alpha-1 performed exactly as designed. And it’s the design that must improve!

One thing a few people reported was high CPU use in Windows. This was caused by lots of spinning to ensure accurate deltas in the game’s compute and render loops. I’ve done a little work improving this in windows and the CPU issues should be gone in the next release.

I’ll be releasing alpha-1.1 next week.
If you’d like to be a part of testing the alpha versions please get into contact using one of the methods on the front page.